For awhile I had been wondering who was the better "strikeout avoider" - Willie Keeler or Joe Sewell.

Willie Keeler has always had a reputation as a tough player to strike out and his up until recently partial totals gave an indication of that (6 in 1894 & 9 in 1896).  Now that all of Keeler's missing seasons have been added to B-R, we can now get a more complete picture of Keeler's ability to avoid the whiff.

First of all, one can go to B-R and look at the AB/K career leaders and see that Keeler & Sewell are neck and neck.

But this raises the inevitable dispute that Keeler hit in an era that had less strikeouts per ab anyways;  Afterall, Sewell played during the era of big hitters.

Well, I wanted to see which player was a better strikeout avoider relative to their eras.

I first went and calculated the K/AB ration for all of the seasons that Keeler and Sewell played in:

1. Despite playing in completely different eras, the overall league averages for Keeler's and Sewell's K/AB is nearly identical (0.86 vs. 0.88).

Again, as stated before, their career K/AB are nearly identical.  What is interesting is their BK+ numbers.

5.  If we only look at "core" seasons (120+ games) for each, the numbers tell us a slightly different story:

These are arbitrary groupings of course, and either way, these two hitters were easily the best at avoiding the whiff.
Posted by Jonathan Frankel at 8:00 AM 3 comments: 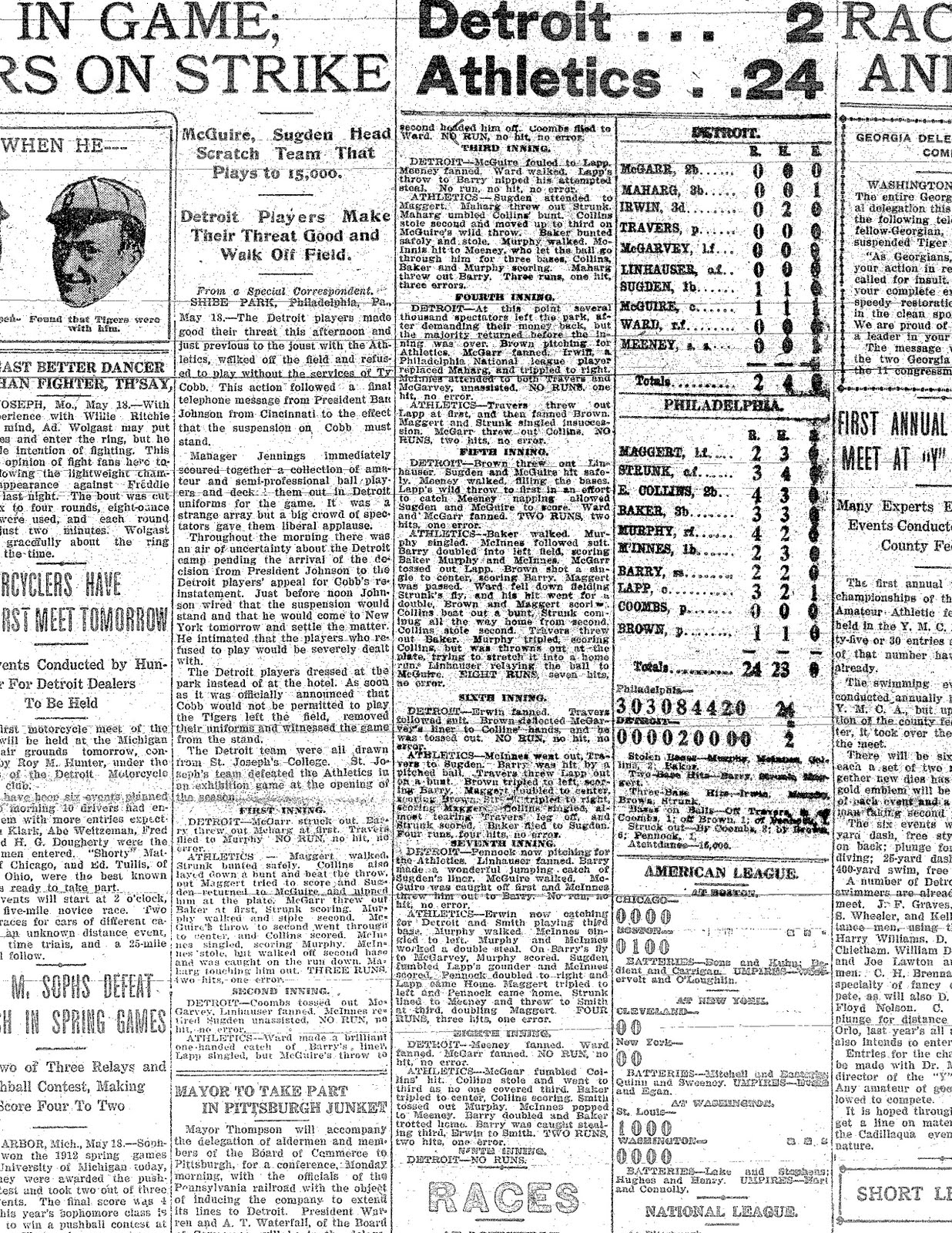 I wanted to kick off this edition of my blog with a recent scan that I did from the 1912 Detroit Times (a bit large, but wanted to make sure all could read it).  This is the play-by-play (all except the 9th inning) of the infamous May 18 game in which the entire Tigers starting lineup sat out in protest of Ty Cobb's recent suspension for going into the crowd to "quiet" a avid fan.


Travers ended up being the only ballplayer to become an ordained priest (so I understand).


As to my recent progress, I am plugging my way through 1912 - as you can see above, I have been able to get a good deal of Detroit (home & away) play-by-play from the Detroit Times.  Thank goodness that the Library of Michigan has a microfilm scanner, making my job much easier.  I am currently looking through the scanned (tif) games and documenting the batter k's by player and inning.  Once that is done, I will enter this info in my 1912 AL season database.   I recently received Boston k info from Bob Richardson - no boxscore k's and scattered play-by-play from the Record.   Bob even found a couple of k's in the Boston Traveller (a new paper to me).  He does a nice thorough job going through each possible paper (including the Advertiser and Transcript).

I have started in on 1912 St. Louis as well - The Evening Star has scattered play-by-play as some of the "Sporting Extra" editions were fortunately scanned.  More is on its way from Mo. as I write.

Also, I have requests out to my UK contact for game account scans from 1897-1903, 1909 missing Cincinnati games from the Cincinnati Enquirer.   Going through the game accounts can be a bit tedious and eye-straining, but every time you find a "missing k", it makes it worth it.

That's all for today.  Hopefully I will be posted here a little sooner than next month, but no promises. :)
Posted by Jonathan Frankel at 7:23 AM 3 comments:

The New Phone Books are Here!!!!

Well, today I feel a bit like Navin Johnson of  "The Jerk" fame.

I found out today that my data is now in Baseball-Reference!!!!

This is so cool and am glad that it has finally "arrived" there.

I repeat my thanks to the libraries and individuals who have helped me along the way and again a special thanks to Pete Palmer, who encouraged, reviewed, and promoted my data to the proper folks.

As to my current status, since my last update, here is what I have been working on:


In addition, I have started going through my available on-line sources (Proquest, Fultonhistory.com, GeneologyBank.com) to document the 1912 AL K's.  So far done are Chicago and Washington.  I have started in on New York on FultonHistory.com and "unofficial" Retrosheet play-by-play, which tends to go slow due to the speed of the pdf loads and lack of a decent index.  Rick Huhn has sent me the 1st few Cleveland home games from the Cleveland Leader and Ed Morton has sent over the April play-by-play from the Phil Evening Telegraph.

I got 1906 St. Louis Republic from the Mo. Hist Society (Apr-July).  So far, nothing new.
Still would love to find someone with access to the Proquest Post Dispatch to help me out (no luck gaining access remotely).  The P-D is not a great resource from what I have seen, but for StL, I need to look at every paper I can.

While I get my next season, 1901 NL set up for blog posting, I wanted to give a quick update on my progress.

Main areas that I am missing are Boston -  the on again/off again (see 1905/06) was off again, as I have only been able to get about 80% of the home game k's - thanks a good deal to the Boston Globe having decent play-by-play in their game write-ups.  Not true pbp, but a reasonable fascimile.

Washington - The Washington Post around July 2nd, decided to stop including the batter strikeouts in the box (actually in the box as a column).  This is a big disappointment as 1910 is the year that Walter Johnson had 310 strikeouts - which at the time was believed to be the record - in spite of the fact that Rube Waddell had struck out 349 ONLY 6 years earlier.   Apparently, the k's in 1904 were not tracked/documented accurately/correctly and the Waddell's 301 in 1903 was considered the record.  Only in 1946 or so, when Cliff Kachline was checking on Bob Feller setting the record, did Waddell's 349 truly come to light.   I still owe this blog his 1904 breakdown as I did with his 1903 season - hopefully sometime in the next couple of months.  Anyways, a bit of disappointment.  As a result, I currently only have 83% of the home game k's (a decent #, but still not where I would like it).

Detroit - I have already gone through the Free Press and gleaned a good chunk of home k's, but I am hoping that the Detroit Times had its Sporting Extra edition scanned as it was in 1909.   Hope to get up to Lansing in the next month or so, depending on work schedule and the weather to check at Library of Michigan.  Detroit home k's are currently at 76.7%.

St. Louis - Have not done anything here - I will explain what I will be doing here below.

New York - In addition, I am missing the whole month of August play-by-play for NY games as the NY Evening Telegram's scans found on FultonHistory.com reverted to the Night Edition for this month (from the Late or Baseball Extra edition).

General note:  It is too bad that all of the editions of the papers I have been using did not get scanned - there would be a ton more stuff to pull.  For instance, in browsing a copy of the 1901 Evening Wisconsin sent to me by Dennis Pajot, I noticed that it refers to a "Sporting Extra Edition" available.   Not sure if there are any copies (microfilm or hardcopy) floating around.

1902 - Dwayne Ispring in St. Louis has been sending me scans of the Globe Democrat for games that I am missing info.   Have added a little, some is repeats of what I have already pulled from the Republic.

1899 - Louisville - Esta Day from U of Ky continues to assist me in scanning copies of the Louisville Times, now up to 1899.   She discovered that only a few of the dates in the Times were the "Extra" edition which had the pseudo play-by-play.   She was going to check w/ Louisville Public Library to see if they had any different editions there.  She did discover that the Evening Post had a similar pseudo play-by-play and will be running scans of this for me.

1909 - St. Louis - I had been using a researcher in St. Louis to run scans of the Globe Democrat for 1906, 1907.   She had gotten busy with some other stuff so I decided to check what other libraries carried the GD.
In my search, I discovered that I could get microfilm reels of St. Louis papers sent directly to my house (not ILL through the library) from the State Historical Society of Missouri for around $ 10 each way (+ $1 per reel) if I became a member at the $100 level.  Kind of expensive from a pure research standpoint, but since I can write-off the membership as a tax deduction, it will work well for me.   Plus, alot cheaper and quicker than having a paid researcher do it.  I have already received and reviewed my 1st set of 4 reels, April - August 1909 of the Globe Democrat.  For my next set of reels, I will finish out 1909 and start into 1910 w/ the GD.  After I am done with 1910, I plan on doubling back to 1906 and request the Republic for 1906,07, 09, 10.  Plan on using this service for the Star and Times for other various years.  Post Dispatch, I hope to find a way of accessing the info directly since it is a Proquest db.

Take care.
Posted by Jonathan Frankel at 5:08 PM No comments: